The following is a poetic reflection on a recent visit to Cape Town. What struck me about the city was the how it seems to be the world shrunk into a city, with global culture and wealth, living next to extreme poverty. I would say, “rubbing shoulders with poverty” – but that would be an exaggeration, as the people are isolated from each other by security gates, walls, cars, and most of all fear. One day this came into focus as we were driven through the massive township of Khayelitsha, from there we were taken to the southern hemisphere’s largest shopping mall, the contrast couldn’t have been more disturbing. The poem follows… 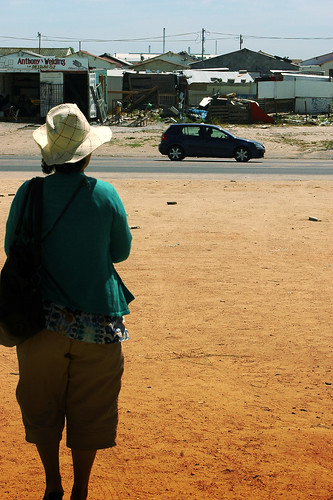 Yesterday, Today, Tomorrow, Forever
One point eight million
living all their tomorrows
in corrugated shacks. A settlement
formalised as township
Over the wall
we shop beneath golden arches.
Filling eyes, bellies and bags
with todays fads.
Whilst a man
pushes his trolley
through aisles of suburban bins
feasting on our yesterdays.
Blessed are the poor.